Community Letter from the Fire Chief

We got an email from Roger about the Goodwin Fire.

The fire department and the board wanted to share some lessons learned from the Goodwin Fire.

As many of you know, Walker and Potato Patch were fortunate enough to have a structure protection task force assigned to our area for a few days when the outcome of the Goodwin Fire was still unknown.

Walker Fire personnel worked in conjunction with the task force.

A couple of key points about the fire itself that need to be understood;

Quite bluntly, we dodged a bullet.

We drove the Division Supervisor and Task Force leader from the structure protection detail around the area to help them better understand what their task would be and to hopefully use our local knowledge to better plan their actions.

They were very impressed by some of the areas but frankly dismayed by how little effort had been put in at many other homes here.

Their initial reaction was to focus on areas where people had clearly invested (time and/or money) in protecting their homes.

They urged us to convey this to the community (assuming the fire never got here) in an attempt to compel people to take defensible space and home mitigation more seriously.

As an example of the advantage of cleaning around your property, during the Yarnell Hill Fire in 2013, there were 65 homes in the burn area that had been mitigated.

Of those 65, only four burned.

Storing wood under a deck is storing fuel that can burn under your deck.

If there is no fuel under your deck it is less likely that your house will burn.

Raking leaves and other forest litter away from your house also removes fuel that can burn.

This only needs to be done a few times a year.

Removing “dead and down” trees on your lot (there was a lot of this in Potato Patch left from the storms over the winter) can be expensive but again, this is fuel that can burn, and burn for a long time.

Had the fire gotten here it probably would have been on ground.

If there is no fuel around your home to burn, your house would be very unlikely to in fact burn.

A fire needs heat, oxygen and fuel in order to burn, it must have those three.

The context here is removing fuel.

Again, I can’t express enough that this fire was a very big threat to the Walker area.

If we want to help protect ourselves from future fires, we as a community need to do a better job of stepping up and doing the work.

It is crucial not only for our own homes but also for our neighbors.

A great place to try to learn more would be at http://www.walkercaa.org/Firewise_T.html.

This site has a wealth of information to help you protect your property including when grants might be available to help defray the expense of mitigation.

Walker Firewise has been proficient in getting grants in the past and we hope they can continue to access funding. 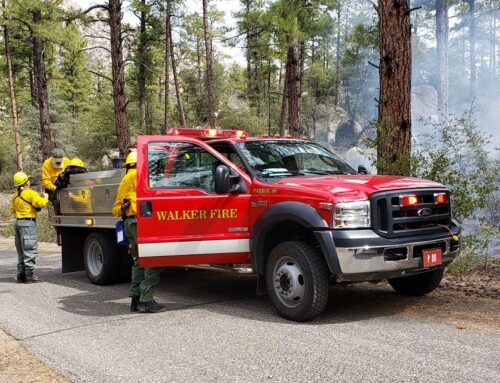 Do You Have A Steep Driveway? Is Your House On Fire? Gallery

Do You Have A Steep Driveway? Is Your House On Fire?